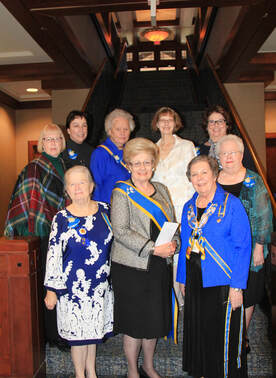 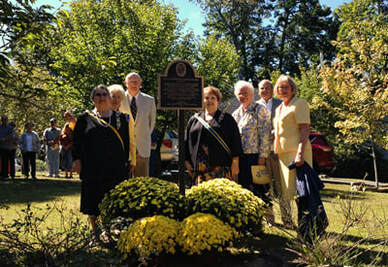 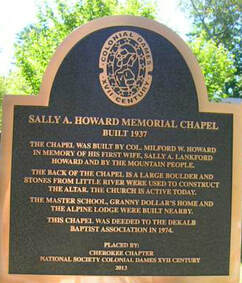 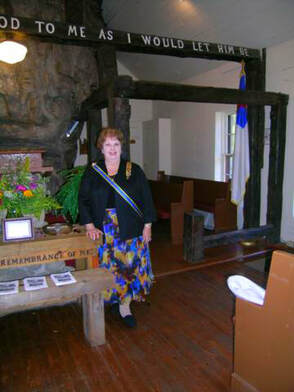 The Cherokee Chapter of the Alabama Society Colonial Dames XVII Century dedication of the bronze marker for Sally A. Howard Memorial Chapel in DeSoto State Park.  Amelia Dodd, President of the Cherokee Chapter and Oma Gaines, Marking and Preservation of Historic Sites Chairman, joined in welcoming Annette Edgeworth Smith, the President of the Alabama State Society, CDXVIIC, who spoke on the importance of marking historical sites.
Sallie Howard Chapel
Rock walls covered in English Ivy still stand today as a monument to Howard's dream of a Master School for that was never completed. It stands, on private property, as it did when work on the project ended.
History of DeKalb County Alabama -  Milford W. Howard, Builder of Howard’s Chapel
Milford Wriarson Howard was an uncommon man. A self-described dreamer born December 18, 1862 near Rome, Georgia. With little more than 11 months of formal education, Howard began to study law under Major Joseph A. Blance, a lawyer of Cedartown, Georgia who had lost one arm as a Confederate soldier. Howard fulfilled his "impossible" dream and was admitted to the bar one year later.
He arrived in Fort Payne on November 7, 1881 and began studying the statutory law of Alabama before becoming one of the youngest men to ever apply for admission to the Alabama bar. He soon met Sally Lankford and they were married 2 years later on December 2, 1883. They had 3 sons one of which died at only 11 months old.
Howard was an outstanding lawyer and speaker. He traveled, lectured, wrote books, farmed and after an illness he stopped practicing law and invested in a Mexican mine, Louisiana and Texas oil fields and a Salmon cannery in Alaska. He lost money on all of these investments and after a strenuous year’s work on the farm, Howard moved to California.
He returned to Alabama in 1923 and began work on a school for underprivileged children. His wife Sally remained in California. Debts were added to debts and little financial aid came, except frequent checks from Sally Howard in California. Sally spent the summer of 1925 with Howard, already seriously ill with cancer; she died in the fall, soon after returning to Los Angeles. Due to insufficient funds the dream of the Master School was lost.
November 9, 1926, Howard married Stella Vivian Harper "Lady Vivian". She too, was also a dreamer and she and Howard traveled throughout Europe together. Howard had yet one more dream. When he had buried Sally Howard at Forrest Lawn Cemetery in Glendale, California, he had greatly admired the Kirk ‘O the Heather church there. This church was a reproduction of the Annie Laurie Church in Scotland. He had secretly hoped to reproduce the Glendale Church as a memorial to his first wife. His last accomplishment was getting enough money and materials to build this memorial, though the organ and beautiful stained glass windows he envisioned were never added. A line from Sallie’s last letter was written above the stone altar, "God has all ways been as good to me as I would let him be." The chapel was dedicated at a memorial ceremony on June 23, 1937. Two years after Howard preached the first sermon in the rock-anchored mountain chapel, the aging, broken man became ill. He traveled by train to California, where he died of pneumonia on December 29, 1937 at the age of 75. His body was cremated and Lady Vivian made arrangements to place his ashes inside the huge boulder of the Sally Howard Memorial Chapel in the fall of 1938.
A bronze plaque placed over the boulder reads "Milford W. Howard, born December 18, 1867. Died December 28, 1937. I shall dwell in the house of the Lord forever." 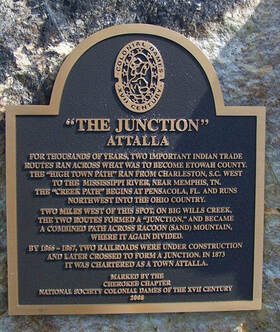 Bronze plaque mounted on a large rock to mark the nearby location of the junction of two Native American paths, one running from the area of Charleston, SC to the the area of Memphis, TN and one running from the area of Pensacola, Fl to Ohio. The paths joined, crossed a mountain, and then divided. The marker is located at the junction of 5th Avenue NE and Cleveland Avenue in what apparently will be a park. The marker was placed by the Cherokee Chapter National Society Colonial Dames of the XVII Century.
Attalla For thousands of years, two important Indian trade routes ran across what was to become Etowah County. The “High Town Path” ran from Charleston, S.C. west to the Mississippi River, near Memphis, TN. The “Creek Path” begins at Pensacola, FL and runs northwest into Ohio country. Two Miles from this spot, on Big Wills Creek, the two routes formed a “junction” and became a combine path across Racoon (Sand) Mountain, where it again divided. By 1866 – 1867, two railroads were under construction and later crossed to form a junction. In 1873 it was chartered as a town Attalla. 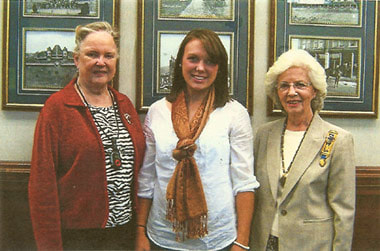 ​The Wills Towne Mission was established in 1823. The Willstown Mission Cemetery is located near the corner of Godfrey Avenue and 38th Street in Fort Payne, Alabama.